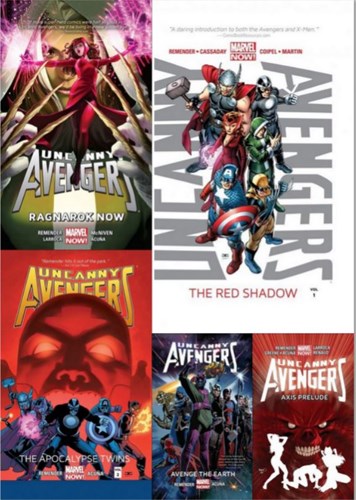 In the wake of Professor X's funeral, Captain America creates a new Avengers unit comprised of Avengers and X-Men, humans and mutants working together. But the Red Skull has returned -- straight out of the 1940s -- and he wants to destroy all mutants! And what gruesome weapon has given the him dangerous new powers?

The future begins in the past! The beginning of the end looms as the Apocalypse Twins debut! Why do they seek to anger the Celestials? What is their connection to Kang? And how is Thor responsible for their mighty power! As Apocalypse's Ship attacks S.W.O.R.D.'s Peak station, a Celestial meets a shocking fate, and the Four Horsemen of Death are unleashed!

It's the dark origin of the Apocalypse Twins as Kang's true motives are revealed! A secret pact between Ahab and the Red Skull will bring horror to all mutants - but when a deranged Sentry kills an Uncanny Avenger, it's only the first casualty of many! As the Wasp faces the Grim Reaper, the Scarlet Witch confesses her true love and makes an impossible choice. And Sunfire and Rogue must defeat the Apocalypse Twins alone - or watch the end of our world! Wolverine fails mankind, more Avengers die, villains take their revenge, and the Unity Squad is left shattered. The fate of humanity rests in Thor's hands, but can even the God of Thunder defeat the combined might of two Apocalypses? Bring on the bad guys, because Ragnarök is now!

Welcome to Planet X, the new mutant homeworld, where everything is great - if you possess the mutant gene! The Wasp is the last human alive, relentlessly pursued by Magneto's All-New X-Force, and protected by her husband Havok! Now, as Kang's Chronos Corps arrives on Planet X with a terrible offer, the former Unity Squad members must reunite to defeat the Apocalypse Twins and avenge the Earth! But even with a time traveler on their side, is it too late? Which of the seven prime futures will become dominant? And what is Kang's hidden, ultimate goal? This is it! The conclusion to an epic two years in the making - and rest assured that nothing will ever be the same again! Kang's ultimate revenge is revealed, as the Avengers Unity Squad unite entirely in humanity's darkest hour!

The march to AXIS begins here as the Uncanny Avengers are reunited! The threat of Kang is over, but what are the repercussions? A dark secret is revealed in Genosha, and Havok and his team are defeated at the hands of the sinister S-Men. The Red Skull's revenge is now unstoppable! The great vanishing has begun, the Uncanny Avengers are too late, and Havok witnesses the Skull's greatest atrocity yet! Meanwhile, Magneto discovers the Skull's possession of his dead friend Charles Xavier's brain and powers, and becomes determined to shut the villain's scheme down! Prepare for a Magneto vs. Red Skull blood match that will result in a terribly altered Marvel Universe! Plus: The Mojoverse gathers an all-new, all-creepy Avengers! It's the shocking debut of the Avengers of the Supernatural!