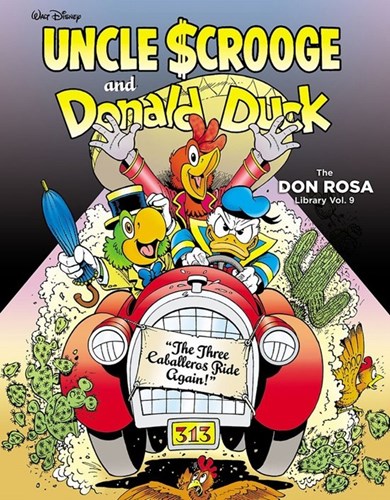 Who gets stuck with all the bad luck? Donald Duck doesn’t want to be trapped on a runaway Mexican train, nor fighting an impossible battle with a robber named Goldhat! But when a fortune in silver is involved, and Donald’s best friends José Carioca and Panchito are here to help, the impossible seems possible!

Don Rosa, among the world’s most beloved modern cartoonists, launched his Carl Barks-inspired comics career in 1987. Famed for his prizewinning Life and Times of Scrooge McDuck (Will Eisner Comic Industry Award, 1995: Best Serialized Story), Rosa wrote and drew a whopping two decades’ worth of ripping Scrooge and Donald yarns! And The Three Caballeros Ride Again! is only the beginning! It’s The Beagle Boys Vs. the Money Bin when Grandpa Blackheart finds the blueprints to Scrooge’s vault, and in Forget It, Magica De Spell hits Scrooge and Donald with a brainwashing bonus!

Presented with brilliant color and a treasure trove of Rosa’s cover art and behind-the-scenes factoids, these Duckburg epics are back in a definitive, comprehensive edition for posterity, at a bargain price worthy of Scrooge himself!