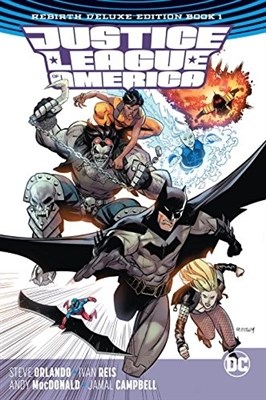 The Justice League are the world’s greatest heroes. The Suicide Squad are its most dangerous. In a battle for the ages, these two powers collided, and out of its ashes a new team is born and a new era begins. America has a new force for justice.

Batman. Black Canary. The Ray. The Atom. Vixen. Killer Frost. Lobo. Handpicked by the Dark Knight himself, the members of this unlikely alliance will soon find themselves tested like never before.

An army of extremists from another dimension has infiltrated our own, seeking peace and prosperity for all by any means necessary. Only the freshly forged JLA can put an end to their advance across the globe. But these Leaguers are as different from one another as ice and fire, or the Dark Knight and the Main Man. Can they come together and prove that the Extremists’ bloody brand of law and order is nothing compared to true justice?

It’s the most diverse and daring lineup in JLA history!