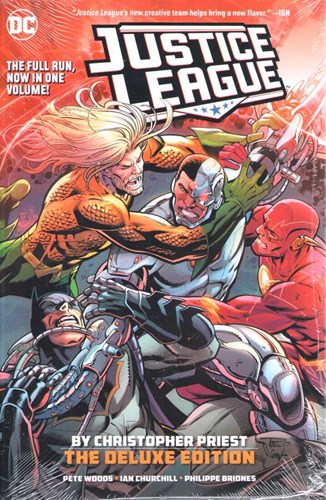 Batman, Superman, Wonder Woman, Cyborg, Aquaman, The Flash and two Green Lanterns form the Justice League. An elite super team set to tackle any threat too big for one superhero alone, but when a new threat comes from an unexpected place, will the Justice League be able to save the day?

The League is confronted by three concurrent threats, a sleep-deprived Batman makes a crucial error that causes an unthinkable and potentially unforgivable tragedy.

As if that wasn’t enough, the combined Justice League and Justice League of America teams clash over leadership while the Green Lanterns face making critical choices that will affect their teams forever!

Eisner Award-nominated writer Christopher Priest (Deathstroke) is joined by artist Pete Woods as they kick off the next chapter of one of DC’s flagship series in Justice League: The Rebirth Deluxe Book 4!