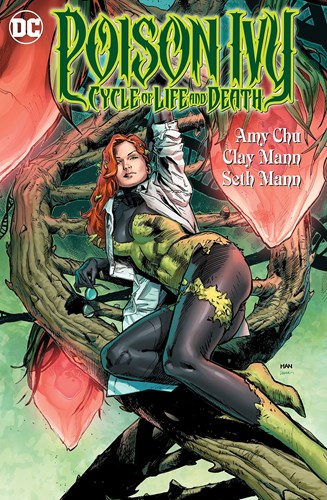 There’s animal. There’s vegetable. And there’s somewhere in between.

That’s where Dr. Pamela Isley, a.k.a. Poison Ivy, finds herself. Instead of battling the Dark Knight, she is now a researcher at the Gotham Botanical Gardens, studying the possibility of creating plant-human hybrids.

But when her fellow scientists start turning up dead, she’s both the natural leading suspect…and the only person (or plant) who can crack the case.

To solve the mystery, Poison Ivy must team up—or throw down—with her oldest friends and closest frenemies, from Harley Quinn to Catwoman to the Swamp Thing. Can she keep things under control, or will she be responsible for a deadly new harvest?

Find out in POISON IVY: CYCLE OF LIFE AND DEATH. Sprouting from the brains of the up-and-coming creative team of writer Amy Chu and artist Clay Mann, it’s a mean, green murder mystery starring one of Batman’s greatest rogues!