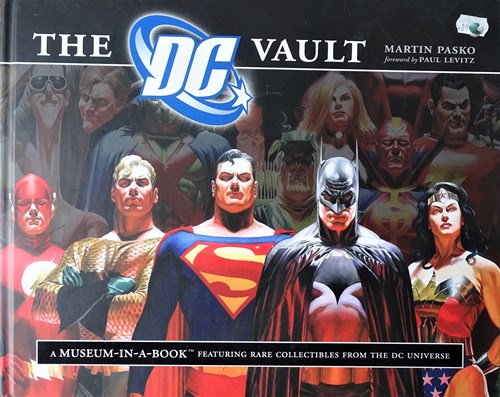 
In 1935, popular culture was forever transformed when DC Comics published the first book of “all new, all original” comic material. To the delight of millions of readers everywhere, the modern comic book was born, and from its pages came leaping an exhilarating cast of characters.

Now The DC Vault unlocks DC Comics' most fascinating secrets and deeply buried treasures, presenting a colorful array of historic and never-before-published memorabilia, including early sketches, covers, memos, press materials, and much more. From a working reproduction of a 1942 Junior Justice Society of America decoder, to a series of Public Service Announcements starring Superman and Batman, to the original pencils and inks for Wonder Woman #63, this dazzling chronicle contains more than 25 plastic-encased archival pieces for readers to pull out and examine—all while learning about the artists, writers, and world-famous super heroes that make up the DC Universe. Whether you've been collecting Superman comics since the '40s or have just discovered the amazing Sandman saga, you'll revel in this vibrant treasury!