Batman and the Outsiders 1 - Lesser Gods 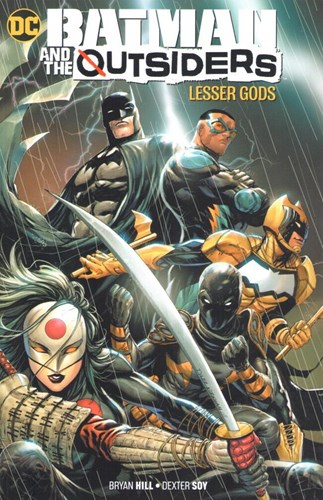 Years ago, an evil organization called the Ark experimented on an innocent family, transforming them into meta-humans. Batman defeated the Ark and safely placed its victims into hiding. Or so he thought. Now, most of the family is dead. The sole survivor is on the run, and Ra's al Ghul himself is on the hunt for her.

When this case gets too dark for even Batman to handle alone, he must form a new team to light the way. Katana. Orphan. The Signal. And their leader, a living symbol of hope in the darkness, Black Lightning. They're the only ones Batman can trust to keep his secrets and fight his battles.

But this team isn't made of mindless followers, and if the Dark Knight or the Demon's Head get in their way, these soldiers aren't afraid to break ranks.