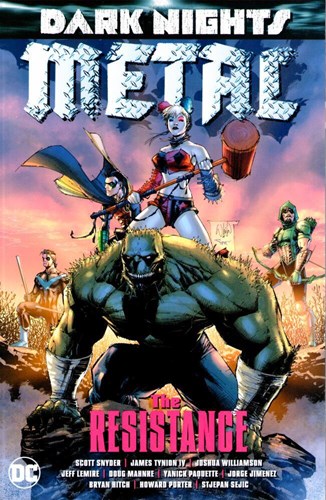 The Nightmare Batmen have descended to Earth from the events of Dark Nights: Metal. Against an army of Dark Knights, can members of the Justice League, Teen Titans and Suicide Squad come together to form a resistance to stop them?
The Justice League has scattered around the world to find the only artifacts that can fight back against the invasion of the Dark Multiverse. The League thinks they know how to take back their world, but they are not prepared for who is standing in their way: the Seven Dark Knights of the Dark Multiverse. All the brilliance of Batman, but combined with the powers of the Flash, Aquaman, Cyborg and more and none of the morals.

The shocking events of Metal have transformed Gotham City into a mosaic of fantastical realms full of monsters, magic and doom. Including Batgirl, Harley Quinn, Killer Croc, Black Canary and Green Arrow all trapped in a labyrinth of madness and death! Meanwhile, the Justice League are trapped in pocket worlds with their evil Batmen counterparts! Will the heroes be able to escape in time to fight against the villainous mastermind Barbatos?

Filling in the gaps between issues of Dark Nights: Metal, this tie-in graphic novel is a crucial companion story to Scott Snyder and Greg Capullo’s masterpiece! Written and illustrated by some of the top talents in the industry, including Jeff Lemire, Joshua Williamson, Bryan Hitch, Liam Sharp, Howard Porter, Robert Venditti and more.